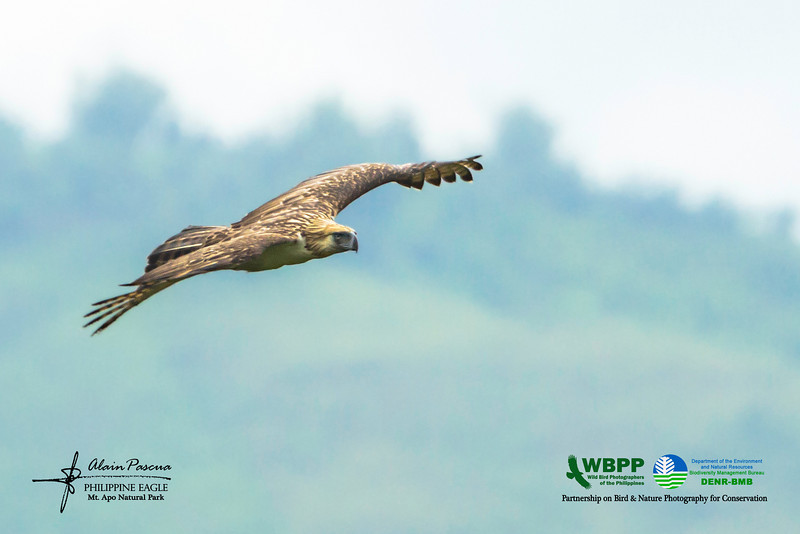 Exactly 75 hours after the signing of the partnership agreement between the Department of Environment and Natural Resources - Biodiversity Management Bureau (DENR-BMB) headed by Director Mundita Sison-Lim and the Wild Bird Photographers of the Philippines, Inc. (WBPP) headed by President Rey Sta Ana on December 9, 2013, the first photographs made possible under that partnership came into fruition. And nothing is more fitting as a jumpstart than having the critically endangered Great Philippine Eagle gracing such partnership!

While WBPP Fellows Rey Sta Ana, Jimmy Javier, Bert Madrigal and Rocky Sison represented the organisation at the flag raising and agreement signing ceremony last Monday, I and fellow photographers were birding in Mindanao. It was there that Pete Simpson told me about the sighting of Philippine Eagles at the Mt. Apo Natural Park. So I immediately called up Ms. Nemie at the Wildlife Resources Division of BMB (formerly Protected Areas and Wildlife Bureau or PAWB) for a possible first engagement under the agreement. She did respond with quick dispatch and after some back-and-forth texts and calls with Toto Lechoncito, the first undertaking under the partnership was underway.

The climb to that part of Mt. Apo Natural Park was quite steep. Worse, the lighting was harsh and the heat searing. In fact, one of us almost fainted because of the heat. The heat also made it difficult to focus as the heat waves confused the sensors of our cameras. Pressure was high too, as we were contending between sheer fatigue from rainy birding days in Bislig Picop Timberland Forest that involved long treks and the unbelievable traffic jam that plagued Davao City making our time shorter as we have to replan our route to the airport with 2-3 hour leeway.

We only had about two hours of shooting time. I was able to press the shutter about 900 times within that short period. Luckily, some good photos survived.